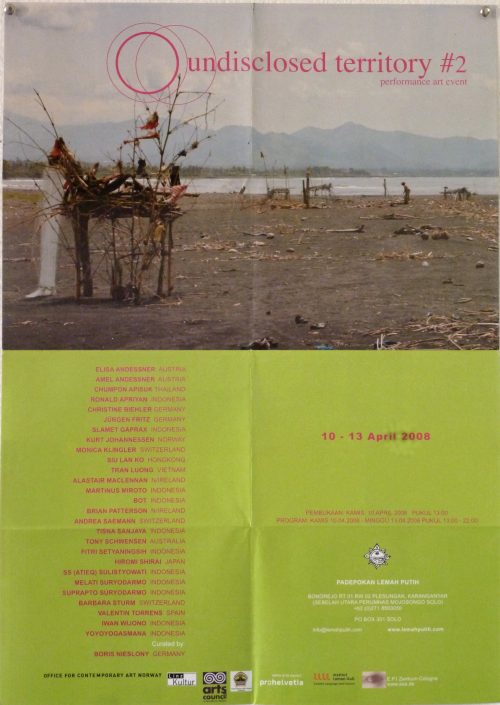 The people of the audience sit down when the performer, standing still, is covered with a white sheet

Walking sheet: the performer dressed in black, feet and hands, head included, with a sheet in one hand and a bucket in the other

He moves toward the first rope, leave the bucket on the floor,

Begin to hang up the sheet, which reaches the floor.

When you have hanged it,

Slide projector on: only light

Leaving from the projector of light, he opens a hollow of light between the arm and the body, by which it draws a hand; from there to the shadow of the whole body, approaching the screen or moving away, changes suddenly in size.

The shadow tries to touch the limits of the screen

It moves towards the other end: Hands on the head - Cyclops.

He crouches to become a report shadow similar to that of the bucket with the other sheet that is at his side; Every time he gets up he composes a shadow of something different

With one hand he moves the boundary of the sheet creating waves that "dissolve” the outline of the shadow.

He puts on the end and pulls a hand pulling the shadow until he is half-body out, starting a dialogue of his right arm in front and his left back, matching the shadow with the backlight.

Movements with hands and arms: Coincidence to discordance and concordance.

The light is turned off on the sheet

Begin to spread the phosphorescent sheet by the collected light, gradually creating shapes in space.

Hang up the sheet. The performer is situated behind.

With an intense and small flashlight, which passes by the outline of his body, it draws with light his silhouette. It places some energetic points within the "copied" body.

The shadow of the performer appears on the sheet with outstretched arms waving his hands.

The light goes out

The shadow, immobile, is fixed on the sheet that emanates phosphorescence.

From one end he reaches out his hand in front of the sheet, lights it behind the sheet.

Appearing like a hand-shadow that erases the previous shadow of the figure of the performer.

Then there are several flashes that erase any trace of shadow and impress the retinas of the spectators.

Light a thick wick candle, one hand covering the light that illuminates the figure of the performer.

He leaves behind the sheet.

He leaves the candle to someone in the third row. He keeps it halfway up to project, on the sheets, the shadows of those seated in the first rows.