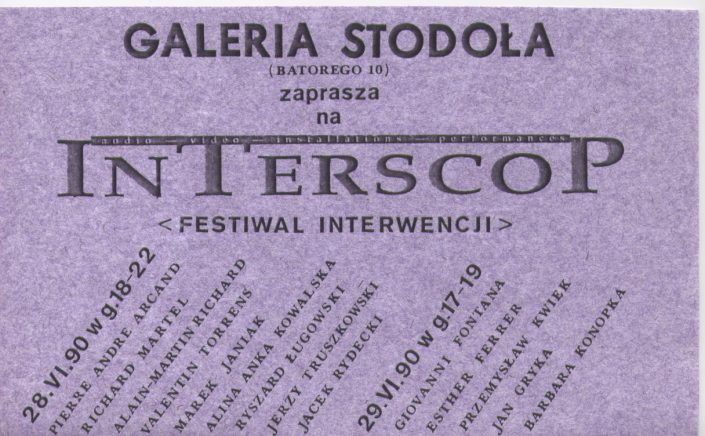 To be performed in dim light.

A huge wall, one third of it is occupied by the image screened of a big chain, which ends are linked by an open lock.
Throughout the action, choppy noises of advertisements, chains, coins, radios, noises are heared loudly.
The performer dressed in black, hides his face and tourns his body scratching the wall. A few meters away a white coat is hanging on the wall, the performer wears it and white gloves, wich are the only surfaces catching the projected images.

Two assistants are carrying slide proyectors and moving between the audience and the performer; they are screening on the performer’s body and the wall some huge images as well as the huge shadow of the performer on the wall.
The images are such a details of bank notes, passports, signatures, stamps, etc.

The performer is moving to get screened on his clothes; when the image of the performer from the ID card overlaps his covered face, he removes his black mask.
Other images such as advertisings are projected f ollowing one another.
The performer’s shadow is interacting with the advert models, showing the relationships established between the consummers andthe advertising proposals.
On the floor ther’s a table upside down with a candle on each leg which are light by the performer.
Then the performer puts some real flowers on the back of the table, making the shape of a heart and setting it on fire.
Shaking a briefcase filled with coins, the performer walks aroud the table.
The performer offers to the audience chocolate coins coated in golden aluminium, putting them on the tongue of each person in the audience of each person in the audience as if giving a communion.
After that the performer throws real coins showering them on their heads.

Now the projections of images from advertisings are running faster than before.

The performer and his shadow are moving from one projection to another in a stressful way.
The last image is a luxuryblack car with a sign: “Healthy selfishness” The performer is trying to reach the lock until he is exhausted.
While he is falling his hands are slipping on the wall.
The ads images are then projected on the audience.