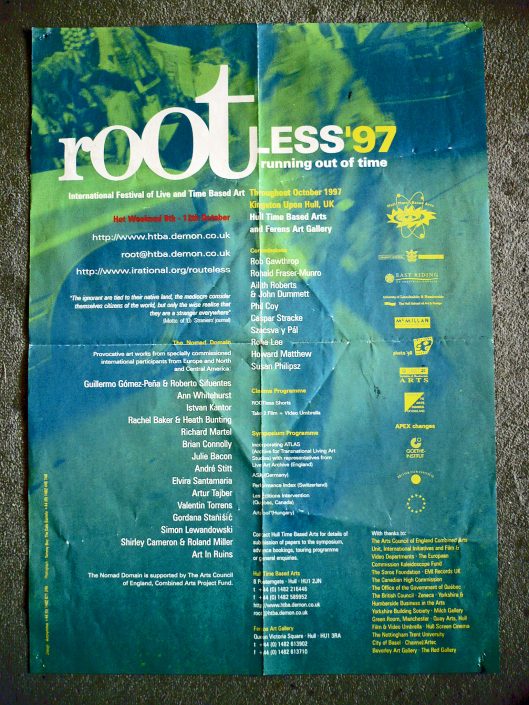 The performer goes with all the body dressed in black, also the head, the hands and feet. You can not see him.
A flashing red dot appears.
First in one hand and then the other, the feet and the head, forming a point, a line, a triangle, a square and a pentagon.
Then turn off all the red lights except the one on the head.

While the lyrics of the song speak of galaxies on the other side of the wall, projections of luminous texts on a dark background: "... A million people, crying in the middle of the Sahara ..." comes a Tuareg and asks: Why you cry? "They respond immediately ..." We are lost! "

Now the sound is a vibration that increases in volume.

Five white paper table mats that the performer raises in the air, appears a long flame that sets the paper on fire, one after another gently rotate in the fall in flames to the ground
After the last rug in flames a new projection: "Stop the world that I'm going down!"

A small moving white ball appears in space, changing shape to cover the foot and then the entire leg of the performer. With the black light is the only thing you can see.

The sound changes at a syncopated rhythm

The leg begins to walk from side to side, changing direction.
When touches the wall, the performer makes a yellow phosphorescent contact point.
When he reaches the audience he throws a flash.

Now the sound is louder and messier.

Two tennis training machines forcefully launch dozens of balls at the walls, bouncing off the roof and reaching the audience.

The leg moves quickly, phosphorescent paint drips appear filling the wall and floor.
Viewers can see the rest of the artist's body that stands out as a shadow on the bright background.

The tennis machines stop, the strobe lights go out.
Now the sound is sharp: screams, waves ...

Meanwhile, the performer moves slowly, resting his hands on the unpainted areas.
At one point he tries to reach a high point with his hand and show the audience the painted palm.
From one end, pull out the dripping black fluorescent paper, to show below another black level.
The reverse of the wide strip torn is black, it serves as the base and way to go very slowly to the center of the space. The fluorescent traces of the feet remain on the path
Gradually the white sock that covers the leg disappears and the black lights go out.

In a corner, a bright rectangle of light that illuminates the performer whose head and hands are against the corner.
Stay in this position for one minute and turn off the light, leaving the space in total darkness.